During his homily for the Mass on Saturday, March 3rd, at which two of our postulants became novices, Father Matthew Bartulica mentioned that both Saint Joseph and Saint John the Evangelist made a home for the Blessed Virgin Mother.  There are indeed some beautiful similarities in the lives of these two saints: Both remained virgins and both saints had the privilege of living with Jesus and of living with His Mother.  Saint Joseph was entrusted with infant and youthful Jesus at the home of Nazareth, in the company of his virgin Spouse, the Blessed Mother.  Saint John knew Jesus as an adult and received the Blessed Mother from Jesus at the crucifixion: “Behold your Mother.”  As Scripture tells us, “And from that hour the disciple took her to his own home”(Jn 19:27).  Tradition tells us that the Blessed Virgin Mary lived with Saint John at Ephesus.

It is a particular source of joy that the first two Labor Mariae novices have names of saints who lived in such close union with Jesus and with Mary, because that is precisely what we wish to do: To arrive at being wholly transformed into Jesus through Mary!

We celebrate the Feast of Saint Joseph, Spouse of the Blessed Virgin, this week.  There are very few feasts which punctuate the Lenten Season.  Unlike Advent, when we celebrate many feasts of saints, most of the feastdays of saints which fall during Lent are reduced to commemorations….with two important exceptions, namely, the Feast of Saint Joseph on March 19th and the Annunciation on March 25th.  Last week, one of the children who attends our Catechesis of the Good Shepherd (for children aged 3-6), told me something he learned at home.  He called me over to tell me: “Sister, the feast of the Annunciation sometimes falls during Lent, but this year it falls on Palm Sunday and so we celebrate it after Easter.”  I was stunned at the knowledge of a small child!  We will celebrate the Annunciation this year immediately after the Easter Octave on Monday, April 9th.

We sometimes see images of Saint Joseph which portray him as an old man, while Our Lady is very young.  In truth, we do not know how old Saint Joseph was at the time of his espousal to Our Lady, but I think it makes sense to imagine him being young, as well.  It would not be much to Saint Joseph’s credit to have entered into the entirely chaste marriage with Our Lady if he were already an old man.  Also, one would think that God would not choose an old man to protect the Holy Family and to lead them, first from Nazareth to Bethlehem to register for the census, and then in the sorrowful flight to Egypt.

The Venerable Archbishop Fulton Sheen, in his book The World's First Love, posited the following: “Joseph was probably a young man, strong, virile, athletic, handsome, chaste, and disciplined, the kind of man one sees sometimes shepherding sheep, or piloting a plane, or working at a carpenter's bench.  Instead of being a man incapable of loving, he must have been on fire with love.  Just as if we would give little credit to the Blessed Mother if she had taken her vow of virginity after having been an old maid for fifty years, so neither would we give much credit to a Joseph who became her spouse because he was advanced in years.  Young girls in those days, like Mary, took vows to love God uniquely, and so did young men, of whom Joseph was one so preeminent as to be called the

Just’.” (pp. 60-61 in the edition we received at Christmas—please see that entire chapter for more beautiful reflections on Saint Joseph).

Saint Joseph and Saint John, pray for us, that we may enter into intimate union with Jesus through His Mother and our Mother! 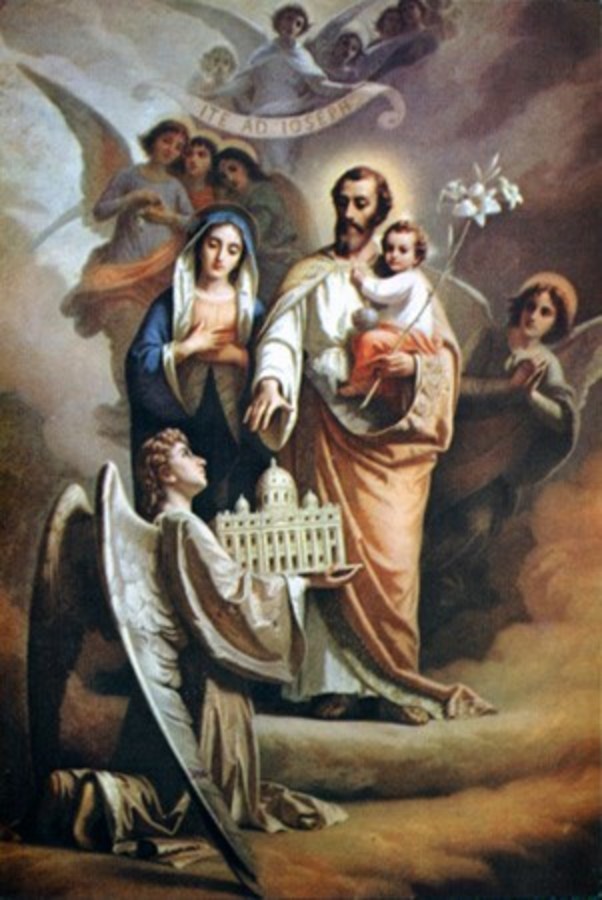 A: Alb and Amice… and Cincture ... END_OF_DOCUMENT_TOKEN_TO_BE_REPLACED

Meditations on the O Antiphons by Sister Margaret

Meditations on the O Antiphons

The O Antiphons have been used in the recitation of... END_OF_DOCUMENT_TOKEN_TO_BE_REPLACED

We Americans are blessed to... END_OF_DOCUMENT_TOKEN_TO_BE_REPLACED